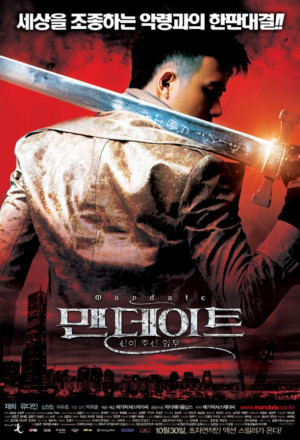 I don't mind bad films as long as they've a redeeming quality, however, the thirty three minutes I managed to endure, with nothing having happened save ludicrous serial rape-murders, too badly acted to shock/entertain anyone, trying to chug along with the god-awful "story" proved way too much for me. I'm pretty sure it'll be the same for most others too.

So, bad acting, bad dialogue, a nonsensical flow of scenes, and a plot highly unlikely to have improved, means that this film gets the 1/10 rating for me having turned it off.

For those curious (film-masochism, ouch!), the lead's meant to be some kind of ghost hunter and the main villain a ghostly killer. Or so I was led to believe by what I could sit through. They're probably all ghosts in a bad "twist" and the tiny fight scene in the beginning was woeful.

Gosh, why am I still typing - hasn't this trash taken up enough of my evening already? Korean film about a young man continuing the fight against demons that was started by his dad. Basically he goes around killing the evil ghosts and demons that are causing all the evil in the world.

This would be a good looking film if it were all stills, but as a film in motion it's a mess. The problem is that in motion, people speak, the plot unravels and the action kind of happens. Its a dull film not particularly exciting. The humor is weak, the action unexciting and bordering on dull. I can see why this showed up in Chinatown DVD shops for a week or two before disappearing.

If you find the opening battles exciting you'll love it, if you don't you'll be like me and spend the next 90 minutes in pain